2016 Top-Rated Awards: States with the Most Nonprofits 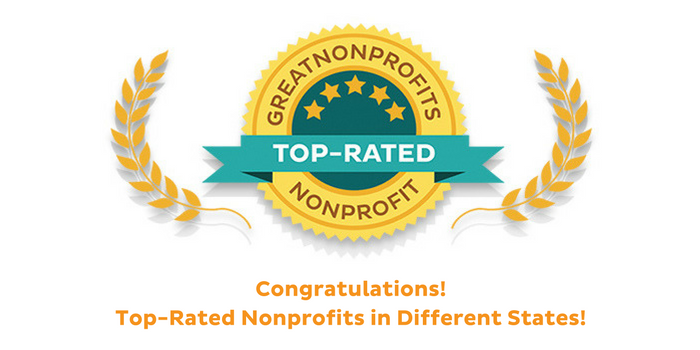 GreatNonprofits.org has released its 2016 Top-Rated Awards, a celebration of outstanding charities that are making a difference in the spheres of healthcare, housing, the arts, education and more! GreatNonprofits evaluates charities based on feedback from the people who work with them directly—donors, volunteers, and clients served—in  order to give the most accurate assessment of an organization’s mission and the extent to which that mission is being fulfilled. This year, every U.S. state is represented on our top-rated list, so we decided to take a closer look at the data and pick out some emerging trends in different parts of the country.

Which States Have the Most Top-Rated Nonprofits?

While California, Texas, and New York have the highest total number of registered nonprofits, Florida edged New York out of the top three in our rankings for the most top-rated nonprofits, claiming second place with 200 nonprofits, behind California’s 460. Texas came in third with 168, and New York in fourth with 158. The remainder of the top 10 is made up of Pennsylvania (98), Virginia (80), Massachusetts and Georgia tying for seventh with 73, North Carolina in ninth with 72, and Illinois and Maryland tying for 10th with 68. One notable feature of the states with the most top-rated nonprofits is the sheer geographic diversity on this list; the West, the South, and Northeast are all amply represented:

How Does Population Affect a State’s Placement on Our List?

Another interesting element to look at is the extent to which a state’s population dictates its spot on the list. As we can see from the table above, most states in our Top 10 also rank in or near the top 10 in overall population. However, there are a few states that notably outperform their population rankings. Maryland, for example, ranks 19th in terms of overall population and yet ties with Illinois, the fifth-most populous state in the country, for 10th place, and Massachusetts, the 15th most populous state, is tied for the No. 7 spot on our rankings. Although a state’s population is a good predictor of its presence on this list, the relationship is less pronounced the further down the list you go. Other factors such as the economic conditions in a state, tax incentives, or the particular values of a community could also affect where nonprofits tend to gravitate.

Which Issues Do the States Care About the Most?

When evaluating the data on the top categories in each state, one fact jumps out immediately: the same five categories appear over and over. Out of more than 40 categories, Health, Education, Children & Youth, Human Services, and Animals dominate the first and second-place positions in every state on the list.

While the data show what issues are particularly important to certain states (a remarkable 12.5% of Florida’s top-rated nonprofits are animal nonprofits, for example), the most interesting part of the data is just how much consistency there is between states. People in all parts of the country are passionate about health issues, which take either first or second place in six of the top 10 states, and education and animal charities are similarly well-represented, both among the top categories in five states on the list. Perhaps the most interesting insight we can draw from the data is just how much Americans from all parts of the country have in common when it comes to the nonprofits in their community that they are inspired by.

GreatNonprofits.org releases its list of Top-Rated nonprofits each year as a special opportunity to acknowledge the incredible work of charities all across the country that are making their communities and the world a better place. Consider sharing this page to raise awareness of these amazing nonprofits, and browse our 2016 Top-Rated list by category or by city to find inspiring nonprofits addressing the issues you care about in your own community.