Elementary School Children Get a Leg Up on Bullying

Fifth-grader Oskar walks around his schoolyard with an overstuffed backpack and a big grin. He’s smitten with his new, white-as-snow sneakers and having a fine day… that is, until his friend Frank accidentally steps on his shoes. Instead of stopping to say how it makes him feel, Oskar reacts harshly and starts bullying Frank.

Thus enfolds the introductory scene to “Oskar and the Big Bully Battle,” an anti-bullying play for students in grade K-5. Produced by TheatreWorks, Silicon Valley’s professional theatre, this traveling show is set to visit at least 20 elementary schools in the Bay Area on its next tour, which runs through March 28. The play’s goal is straightforward: to build awareness of bullying in elementary schoolchildren so that when they reach middle school—when bullying behavior often peaks—they’ll be prepared.

The script is the product of collaboration six years ago between the Palo Alto Unified School District and TheatreWorks. School administrators, alarmed at multiple studies indicating that name-calling, cruelty and violence among children were on the rise, commissioned TheatreWorks to create a presentation that would encourage students to actively think about bullying, and to give them a set of coping skills.

“The play is absolutely awesome—very interactive and engaging for the kids, using a lot of humor with a tad of seriousness,” says Meredith Larsen, School Counselor for the San Carlos School District. “It helps kids to understand feelings and learn strategies for real-life situations.” 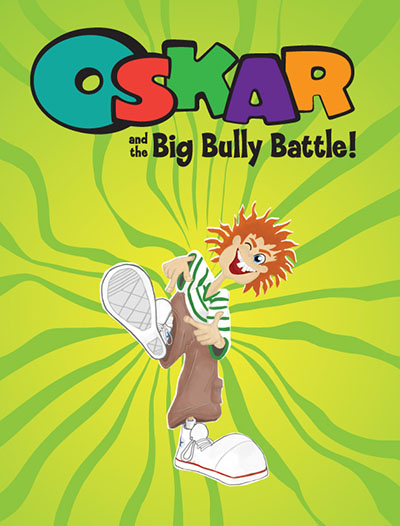 Researchers say that bullying must be addressed during the elementary school years or it can escalate into harassment or even blatant hatred in middle school. The stakes are high: DoSomething.org, the largest not-for-profit for young people and social change, says that by the time American children reach grades four-eight, 90 percent report being victims of bullying. The group also reports that one in 10 students drop out of school because of repeated bullying, and that bullying has been linked to 75 percent of school-shooting incidents.

Oskar and his cast mates, Frank and Beth, captivate students with outrageous costumes, a colorful set and plenty of audience participation. “Most children’s reactions are very genuine,” observes Katie Bartholomew, TheatreWorks’ Associate Director of Education – Schools. “There is always a lot of laughter, however, the children also understand when there is a serious, scary or sad moment occurring. The children usually want to help and encourage the characters on stage.”

The assembly covers many different types of bulling, including physical abuse, taunting, name-calling, spreading rumors and cyber bullying.  Kids also learn the difference between being an “UPstander” (a person who takes a stand when witnessing bullying) and a “BYstander” (a person who doesn’t act).  All the characters in the play are at one time a victim, a bully, a bystander or an upstander, which guides students to see a bit of themselves in one another.  And since studies indicate that girls are equally prone to bullying, TheatreWorks also offers a variation of the play with a female lead, Olive.

“Oskar and the Big Bully Battle” is available for school performances throughout the Bay Area. Schools receive a study guide with activities and discussion questions to help teachers incorporate the lessons into their classrooms.

This article was written by Carol Mahamedi, one of our fabulous volunteer staff writers. Thank you Carol.

To book TheatreWorks’ “Oskar and the Big Bully Battle,” please contact Katie Bartholomew at learn@theatreworks.org or 650-463-7154. You may also call to ask questions and for permission to use videos and photos.